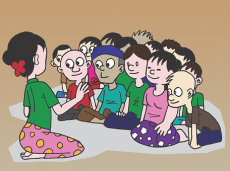 Digitalization has taken over the world in recent years. You admit it or not, the advertising industry is at its peak nowadays. Profit and uncountable profit is made by them every day. Manufacturers look for the opportunities to sell their products at the best possible rates. The competition in marketing has gone incredibly beyond expectations. Advertisements on the TV screens are the work of creativity and innovation. This has made the viewer get to adapt to such stuff. They only buy stuff that has been advertised properly. All that glitters is turning into gold these days.

An explainer video is a source and medium of advertising your product. It is a marketing tool, consisting of a short video animation to demonstrate any product or project.

The simple and basic idea of the project is planted in the minds of the customers by these videos. The colorful visuals and a funny and innovative story are the key features of the explainer video.

Main components and characteristics of the Explainer video

The video is relatively shorter in length. It mostly exceeds to 3-5 minutes and you have to tell the whole story in this time. The video is simple and full of creativity. The story should be simple and audience should be able to understand it easily. When you create animated video of the explainer type, do not try to complicate the story.

Animated characters add the funny and attracting element to the video. Having an animated character in the video attracts the audience of all ages. Adding a joke or comedy would add more benefits.

Music and visual quality of the explainer video must be high. The music should be smooth ad pleasing to the ears. About the visuals, hire a professional videographer rather than some amateur. High quality visuals would attract more audiences.

Benefits of having an explainer video

Videos are posted on the social media platforms such as Facebook, Twitter, and YouTube. Excessive use of social media has enabled the audience to watch these videos. They are posted on these posted, shared by people and even re-posted. So the video is easily available and shareable every now and then. It remains in the circulation for the longer period of time. They can be easily shareable. People like to watch the videos and share them.

Increment in the web traffic:

One more advantage of the explainer video is that you communicate with the audience directly. This is special as your speaking and presentation skills can convince the audience to buy your product. This is a clear marketing strategy to advertise and sell your products.

It is important to convert your visitors into your customers. The conversion ratio is increased as the satisfaction and compatibility of the audience is increased and they are convinced to buy your product. Explainer videos are a profitable business these days.